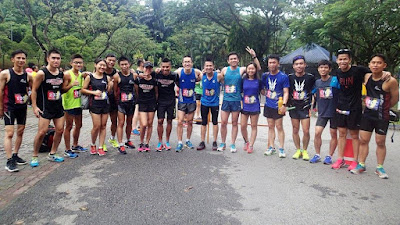 Hand itchy want to write something here. It's been a while since I last came here, exactly 1 year since my last update and coincidently it was also the SCKLM! I just ran the same SCKLM last month! I didn't run much last year. Only total of 6 races. So what exactly happened after the SCKLM last year? PAR 13 I joined PAR relay. Teamed with Charmayne, Lucas, Cola and Eddy. They jio-ed me last minute to replace a friend. I ran 2nd leg and fuck, I did all out but only managed to do 4:18 pace. So slow! I can easily do sub-4 pace few years back! Haha, ok, things changed in few years! I grew older! Wind Runner team! PJ HM Then I joined the KL iconic race PJ HM and bonked half way. I planned to do 4:30 pace but end up 4:45. What a joker! Went home with empty hands. PJ HM - Trying hard to smile with puncit face GE Relay Then I joined Qiao Yun, Khairul, Teck Wai and Voon Leong for a relay in Klang. It was my only podium race in 2017, haha! Thanks to all my teammate.
Post a Comment
Read more 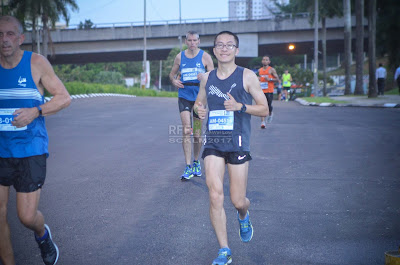 Returning from the 5 months of hibernation and this SCKLM was my first race of the year. I haven't been doing much FM specific training recently so I didn't do quite well in the race. I didn't set any target and was hoping to run with following my HR which is to start with about 150 (80%) and end with 170 (90%) but half way into the race, at about km-4, I caught up with Ewe Bee Hong . Not quite sure why somehow we just ran together. I'd never met her in person but she is no stranger to me. She is one of the famous runners in Malaysia, always one of the top 3 winners! I ran with her from km-5 to km-31. I threw away my HR theory and just followed her all the way. We hold on to about 5:20 pace until km-31 which I bonked and slow down. I told her to go on and eventually she made it to the champion in her category! I was so glad that she won and managed to crack sub-3:45! She sped up after I dropped off, looks like I was holding her up. Haha! KM-34, almost wanted to cry
6 comments
Location: Jalan Raja, City Centre, 50050 Kuala Lumpur, Wilayah Persekutuan Kuala Lumpur, Malaysia
Read more 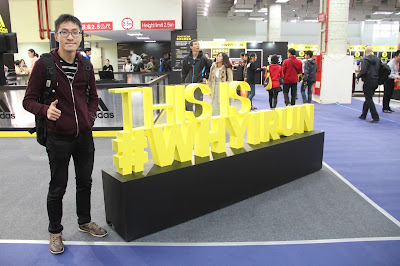 I joined this same race in 2014 and ran a PB so I decided to be back again this year because it was one of the best Marathon that I had ever run. I kept it relatively low profile this time, no one knew I was racing but it was quite obvious as my mileage in the past few weeks was very high. I won't be training so much for nothing right? LOL. I was actually undecided between Shanghai and Taipei. I almost wanted to register for Shanghai but too bad they changed the date to 1 month earlier which I wasn't fit enough during that time. I wanted to join Karen, Angel, TW and Wil for the Shenzhen marathon too but unfortunately, they jio-ed too last minute and I had all my Taiwan trip paid. Expo Route Taipei (previously called Fubon) Marathon is a fast course. The route changed a bit this year but it was still flat and there were only 3 climbs which one was at about 15.7km where we had to run over a flyover to cross the Keelung River, another one was at about 38.8km where we climb
2 comments
Location: Taipei City, Taiwan
Read more

Compressport Half Marathon - The Day When All The Stars Aligned 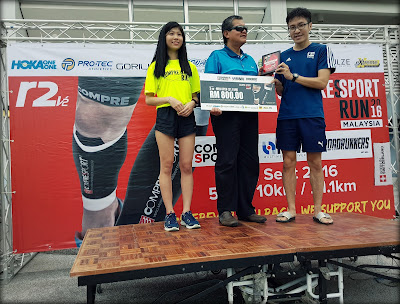 In My Dream I was leading the race the whole way until the 15km mark when my shoelace got loose, so I stopped at the road side and tied it. At this time, 2 Kenyans had caught up and overtook me. Muhaizar and Jironi were about 50m behind so I waited for them and ran with them. They looked quite exhausted so I asked them if they were OK. They couldn't speak much because it's too tiring. I looked at my watch, we were at about 3:30 pace, no wonder they were tired. I paced with them for about 3km and sped off because I wanted to chase the 2 Kenyans. At the last 1km to go I caught up with them and tried to close the gap. They saw me approaching and started to sprint too. We sprinted side by side until the last 100m to go when I actually overtook them but there were so many people and cameras at the finish line, so I had to slow down a bit to pose for the photo. They took this chance and overtook me so I got 3rd ranking. After like 5 minutes, Muhaizar and Jironi reach too. They got
1 comment
Location: Cyberjaya, Selangor, Malaysia
Read more 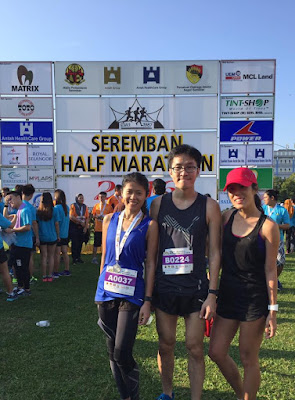 Form wasn't very good recently. Indeed it was quite bad (it's like never good before! LOL!), I thought last year when I couldn't make it to the top 20 in Seremban HM was bad enough but this year I was even slower. Last year I did 1:30; this year I pushed so hard only 1:34. But last year was more competitive, last year even though 1:30 but I couldn't make it to the top 20. This year was slow but I got 19th! Successfully revenge for myself! Haha. The slow time was expected though the podium wasn't. I was quite dilemma these few days even in the race day morning I still couldn't decide if I should DNS. Seremban is not that near, it took me about 50 mins drive. My form wasn't great and I didn't want to wake up so early, waste time going so far to race and came back empty hand. But I felt guilty if I DNS and if I didn't race I still had to do my long run alone so why not just race it! Luckily I won something. Enough to cover my registration fees, petrol
Post a Comment
Location: Seremban, Negeri Sembilan, Malaysia
Read more 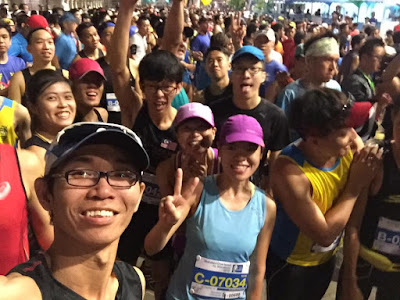 I did badly in the SCKLM yesterday. It was my bread and butter race and we didn't get to run last year due to the haze. This is also one of the very few well organized and high quality local marathons that I would join every year so no matter how much I didn't prepare I would still run it. This time I came unprepared again. I was down with dengue one month ago and suffered from flu a few days ago. I didn't train enough too. The longest run I did was the TM Fan 21km and others were merely a few 10~14km runs. However I felt that I was OK to run. My plan was to pace Michelle and hope I could keep up with her. Not sure if I overestimated myself or I wasn't really aware that I wasn't fit enough to handle this, I didn't expect it to be easy but I also didn't think that it would be so tough. The whole situation just didn't cross my mind. At the starting line, haha! Our plan was to run the first half faster. 5:00 pace for the first half and 5:15 for the s
Post a Comment
Location: Dataran kemuning, Persiaran Senawang 2, Taman Cendana, 70450 Seremban, Negeri Sembilan, Malaysia
Read more 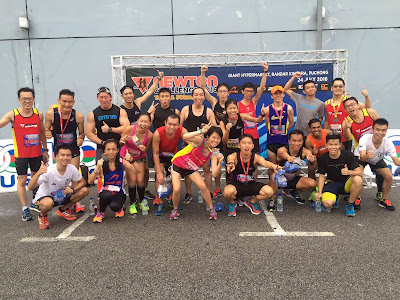 Almost DNS the race due to oversleeping. I set my alarm for 4am but it was raining and the weather was so nice to sleep so the 2nd time I woke up it was almost 5am! My 15km actually started at 6:30am but Alan was holding my bib and he ran 30km which started at 5:30am so I had to reach before that. The race was in Puchong, no way I could make it so I decided to DNS. Then he told me his gf was running 15km so she could wait for me! Luckily and thank both of them so much! But still, it was raining heavily, such a nice cozy weather, I have no idea why I wanted to torture myself to wake up so early for this. Damn! Newton 2016 Rain stopped when I left home but then it rained again when I reach Puchong. The race was still carried on though. Took my bib and warm up a little then the race started. Knowing that my form wasn't great and the route was hilly, I set my target pace to 4:40. It should be moderate hard effort but I think I over estimated myself, the last 4km wasn't as &q
Post a Comment
Read more 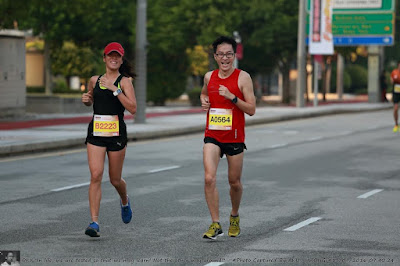 Fitness went down the drain after dengue and had to run this race 2 weeks after discharging from the hospital. Despite knowing that I wasn't fit enough to run any good result, I still planned to run my best effort. My plan was to hold on to 4:30~4:35 pace but 3km into the run, I knew this was going to be very tough. The HR was still on point but my body was contradicting itself. It was getting heavier and heavier so I decided to slow down. William and Masaaki slowly left Michelle, Aiden and I for dust. Aiden started to speed off too after 8km. It was fun running with Michelle, the women first runner up of the race, so proud of her! It was the first time running with her actually. We had a long 21km gossip session and she still decided to run another 9km after the race to complete her 30km LSD! What?! It looked so easy for her! We were running at quite a fast pace, she talked and made fun all the way and she continued to run another 9k. After all this, she could still win 2nd plac
Post a Comment
Read more 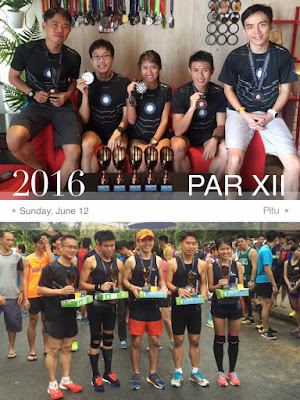 I'm not sure why I joined this relay again and moreover I joined both series. I actually told everyone I was not going to run this relay after participating the 2014 one. That was also why I skipped it last year. 3km kinda race is not my cup of tea. I regretted immediately after I promised Teck Wai to join. At first I actually just promised to run series 1 but not sure why after running series 1, I asked the team if they still wanted me to run series 2. I regretted immediately after I asked! LOL. WTF was I thinking? As usual, I planned to take these relays easy. They were just part of the training for my SCKLM which was my goal race. But again, I knew I was lying to myself. I would never take them easy, in the end I would still run my 100%. My kinda take it easy was just merely I won't specifically train for them. Haha! Let's start with our series 1 podium photo Series 1 This time I teamed up with Angel , Guo Shen , William and Teck Wai . Wil, TW and I were kind
Post a Comment
Location: Perdana Botanical Gardens, Kuala Lumpur, Federal Territory of Kuala Lumpur, Malaysia
Read more
More posts